Head on over to Wednesday’s Blog Tour site to see the secret word and read Christianity and Mythology: A Reprise

Speculative Fiction begins by presuming the basics of a Christian worldview and then asking “What if?“. One of the central What if’s of Daniel and the Triune Quest, and the Sons and Daughters series as a whole, has to do with the origin of worldwide mythologies: What if every culture’s myths grew out of man’s fallen memory of the one true God, his plan for redemption, and the rebellion of dark angels? Wouldn’t there be traces of truth and the thread of redemption in those ancient stories?

Find all the secret words found in each participating blog post, combine them into a complete sentence at the end of the tour on Saturday, then follow the Rafflecopter link below to enter the sentence as your answer.

The secret words so far are:

Review My Books on Amazon! 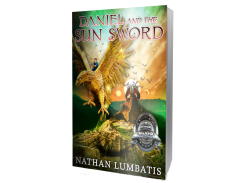